Karna’s Wheel is set in contemporary St Andrews, Dundee (1915-1923), Calcutta (1923-1946) and on the epic plains of ancient India. It is a tale of sons, lovers, mothers and their journey; and of Séamus, a stunted Irishman who helps them on their way. Stephen, the son, is the narrator, a Sanskrit academic, defensive, a dream addict in search of answers. Kitty is the mother, half-Indian, half-Scots, a woman with a murky present who holds tight to the secrets of her past. And Julia is the lover with secrets of her own which Stephen has to earn the right to hear.

Emerging from the faded fragments of his own untold history is Stephen’s grandfather, who escapes from the strife of Dundee to the jute mills of Calcutta... where he finds, not the paradise of the Dundonian dream, but the stuff of the film script which Séamus decides to write. And then there is Karna himself, the armour-plated hero of Stephen’s Sanskrit imaginings: the hero cast out and down, the Hamlet, the Captain Ahab, the James Dean of all our memories.

What People are Saying about Karna’s Wheel.

Compelling, multi-layered and beautifully written. Set in Scotland and India, it interweaves class and colonialism across the generations in a novel which is never less than highly entertaining.  ~  Chris Given-Wilson, shortlisted for the Wolfson History Prize, 2017

This is top-class historical fiction with strongly realized characters and an emotional punch … one of the most human and engrossing novels I’ve ever read … human history at its finest – making us see the Raj not as a list of events but as a succession of relationships, decisions and human frailties … I absolutely loved the evocative description and lyrical language in this novel and got swept up in the story so much that I didn’t want to leave. I can’t recommend this book highly enough – it’s an intelligent, immersive and atmospheric read that draws you in and holds you tight until you’ve turned the final page. ~  On the Shelf Books; a bookblog for readers

Exquisitely written, quirky, remarkably well-paced and wonderfully readable, Karna’s Wheel is touching, humorous, informative and pretty shocking. The research is faultless but never stands in the way of the telling of a good story. I hope this book gets to where it deserves to be – on the bestseller lists. Incredible work. ~  Robin Pilcher, Novelist.

A beautifully written historical novel that takes place in Scotland in 1999 and Calcutta, India from 1923- 46. What a story this is! So evocative, thrilling and quirky, I absolutely loved it. The history of the Raj and the jute trade, both in Scotland and India, make for fascinating reading. The secrets that come out of his research and writing were shocking and sad, but the ending was excellent, very satisfactory. I liked all the characters; Seamus in particular is appealing and got me chuckling quite a bit. A must read that deserves to be a big hit. ~ Hannelore Cheney, Reviewer at Sidney Memorial Library, New York

Karna’s Wheel is … such an immersive read … The characters really bring this story alive … Descriptions of the settings are so crisp and vivid, the language used evokes clear images of the periods, and no matter how vastly different Dundee and Calcutta are, they both felt so impressive, so detailed, so terrific. I have to say that after reading this, I really wanted to find out more about jute trading and the connections between Scotland and India. Don’t you just love it when a book inspires you to start looking for knowledge? ~ Kate Noble, The Quiet Knitterer, book blog.

The writing was fluid, beautiful, but easy to read. The historical sections felt real and alive. I could so vividly picture everything described … It is very fluid … at its core, an extremely internal book … very intriguing to read … The story itself was terribly tragic but in some ways still oddly beautiful. ~ M.L.V Reviewer, Net Galley

Dazzling and inventive … an enthralling journey into early twentieth century Calcutta and the dark corners of the Raj. ~ Andrew Duff, Author of Sikkim; requiem for a Himalayan kingdom.

A remarkable, multi-layered narrative that slowly unravels to reveal the truth behind life-changing secrets. Three stories intertwined (mythology, past and present time) aim to answer the most fundamental questions – who are we supposed to be and who can we become. A thoughtful reflection on colonialism and the importance of knowing where you are from. The rich, vivid descriptions – whether in contemporary St Andrews, early Twentieth century Dundee, colonial Calcutta or ancient India – and imaginative character depictions make this novel truly gripping. It ends with a poignant denouement that lingers with you. I can’t recommend this book enough. ~ L.Ines, Goodreads

Just the book to keep you entertained during the long, dark, cold nights … Karna’s Wheel is the literary equivalent of a Russian nesting doll; stories within stories that are revealed as the book moves forward, each one more decorative than the one before … unique writing talent … an almost lyrical style of narrative. ~ Emma Reekie, The Dundee Courier.

1 Dundee also likes to think its name derives from donum dei, gift of God. Its inhabitants, in spite of everything, retain their sense of humour. 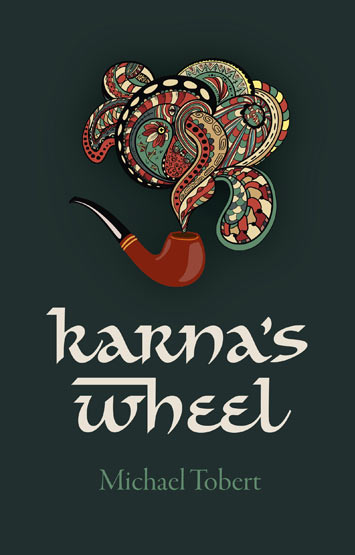 Karnas Wheel is a poignant story about love, inheritance, and the things which make us what we are.

I used to work in an old jute mill in Dundee. By the time I got there it had more or less moved over to the jute substitute, polypropylene – that was before it closed forever, and before jute made its comeback as the eco-bag of choice.

Dundee calls itself Juteopolis, city of jute 1. When the whaling fleet came in, some drunken sailor spilt whale oil on a bale of that useless fibrous plant grown only in Bengal, and Dundee discovered it could turn jute into sacks, dross into gold.

For a hundred years, sacks were big business – among fibres, jute was second only to cotton – and it was these sacks which enslaved the Dundonians in the mills and gave them dreams of riches untold if only they could get themselves to the mills of Calcutta.

Some did. Some became rich. Some, succumbing to the tedium and violence of the manager’s life, left the compound and discovered the other India that the white man didn’t touch.